Guillermo Cuello: I speak, always, of small things: of a body in motion, of a hand, of a simple action, of a nude woman throbbing in a bed... of a small head in the sense of an "imaginary portrait". 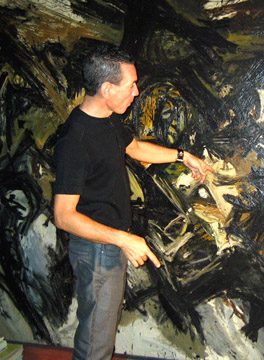 Guillermo Cuello: I am not an abstract painter--and never was one. Not to create any unnecessary suspense, I'll say that it was as much Rembrandt as Goya who provided me of a vision of line that comes from the atmosphere and its density--that comes from the paper toward the artist, rather than the inverse. 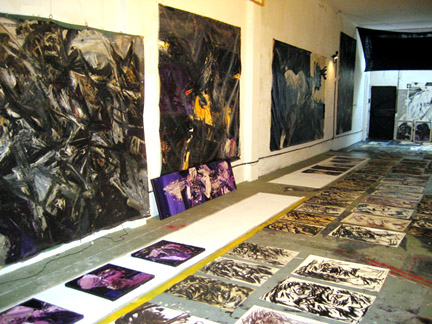 Guillermo Cuello: I was born in the San Telmo neighborhood of Buenos Aires. My childhood was more or less typical, but for the one difference that, for countless hours every day, I made drawings.


Guillermo Cuello: Politically, my family was neither activist nor militant, we simply tried not to get caught up in the convulsions. In our house we always had at hand an amazing quantity of books and magazines: Sartre, the diary of Che Guevara, Tolstoy, Dostoyevsky, Lenin, Borges and Almafuerte cohabited, competed and confronted Whitman, Gertrude Stein, Nietzsche, Hitler's "Mein Kampf", Leopoldo Lugones, Frömm, Hesse, Francis Bacon, Saint Augustine, Saint Thomas, notes on the Koran and stories of the Holocaust. As for art: the house was swimming in complete editions of magazines and books with both Argentine and international collections. So, Rembrandt, Van Gogh, Warhol, Policastro and Xul Solar were no strangers to me.

Guillermo Cuello: In the late 60's and early 70's, began the real escalation of violence in Argentina. One sad day that I'll never forget, I was 9 or 10, my father called me to help him carry packages into the garden. In a big YPF oil barrel, he started a fire and incinerated every book that he had acquired through much time and patience. State violence was becoming indiscriminate: modest houses would be sacked, and the discovery of any book considered "red" could put a person's life at risk. During the decades of political confrontation that devastated this country, my father dedicated himself to saving and protecting lives from both sides. 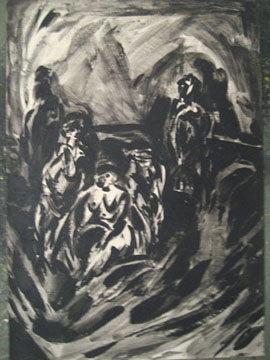 Guillermo Cuello: In the middle of all this I, "the kid", drew and painted. When I was 12 my maternal grandmother gave me an apartment in the back of her house to use as my studio. There I made my first oils on canvas and on wood. In 1976, I came in contact with Aurelio Macchi who taught in his private studio. I spent 4 years studying with Macchi modeling, sculpting, drawing and painting. Macchi showed me how to draw in the styles of the classical Greeks, Michelangelo, Picasso, and Zadkine, and how to differentiate the drawing of the Lombardy artists from a Durer, and a Goya from a Velázquez.

In 1978, I entered the School of Fine Arts "Prilidiano Pueyrredon" while I continued with Aurelio Macchi and also in the studio of Horacio Butler. Both Aurelio Macchi and Horacio Butler were teachers as harsh as they were just. Both were interested in art of ALL periods. While certainly having European roots, they demonstrated a synthesis and a distinct interpretation that comes from this part of the Americas. 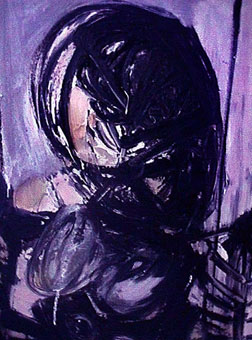 Guillermo Cuello: When I was 19, I went to Spain. Every day, I would go to the Prado to draw and to look at Velázquez, Goya and Rembrandt. I couldn't "decode" the power of Goya and his black paintings nor understand what they awakened in me. I went often to Toledo to El Greco's house--and spent afternoons reinterpreting the Burial of Count Orgaz drawing the holes and counterpoints between materialization and dematerialization, between the figurative and the figural.


Guillermo Cuello: To distract myself, I traveled to the north of Spain in search of a tiny village that was not even a dot on the map. This was the childhood home of my maternal grandmother where, dressed in black and riding a burro, still lived my great aunt. I took pleasure in the breezes even further north where I could smell the salt air and feel the presence of Chillida who came from Basque country. I hummed like the comb in the wind to these things. I came to understand where the white light of the Pentelico ends and the black light, that might be called the new light, begins--a light that few can see in the contemporary world.

Editor's Note:   In ancient Greek sculpture, white pentelico marble was widely used, and admired, for its brilliance; this material helped to determine an ideal for sculpture that endured for more than 2000 years. It was Basque sculptor Eduardo Chillida (1924-2002), more volumetric than minimalist sculptor Richard Serra, who turned inside out the conceptual process and the perception of light in sculpture. In the late 19th century, Nicaraguan poet Rubén Dario spoke eloquently of black light, luz negra, in this verse: "Black light, divine light, light that animates the southern light, light of girls with big, dark-circled eyes, oh the light that makes Pan sing beneath the vines!"--Praising Julia's Black Eyes, Alaba los ojos negros de Julia 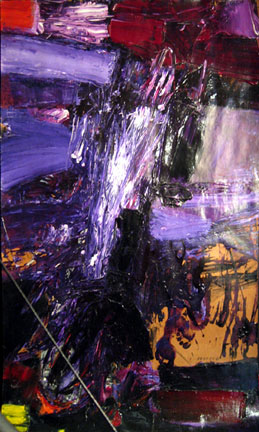 Guillermo Cuello: Still, I remained unable to decrypt this upheaval that Goya represents--in mind, in body and in spirit. I returned to Argentina where, in 1982, I finished my degree as a professor in drawing and painting. I had figured out that, in the 20th century, it's Picasso who destroys the Renaissance, but that he didn't manage to bring forward a new kind of image. This responsibility falls to the hard efforts of Antoni Tàpies, at least in Europe. I continued, in the meanwhile, not really to "get" Goya. I comprehended his firm strokes and his nuances--his distortions coming from the inside with which he wants to imprint matter. But the possible shape of his whole unknown underworld--one that was neither Brueghel nor Bosch--kept me awake nights. 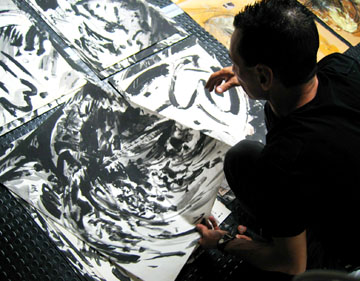 Guillermo Cuello: Having won three grants for foreign post-graduate study, in September of 1984 I chose the Belgian one--to the School of Architecture and Visual Arts La Cambre in Brussels. The program was to have lasted six months, but I staying in Belgium for more than six years developing my work and teaching. There are many things I like about Europe, but the tendency there is to treat anything "other" either as something to revitalize itself--or as merely "exotic". I saw many young North Americans who went to study and try their luck exhibiting in Europe really frustrate themselves.


Guillermo Cuello in Studio
with Sketches 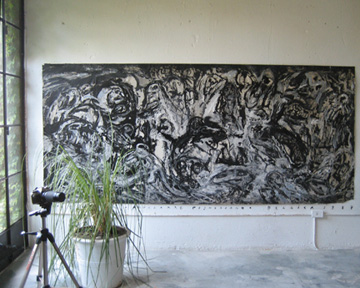 Guillermo Cuello: But it was the crazy 80's with huge investment flows into the art market. When I made by first solo show at the Museum Victor Horta in Brussels in 1985, to my surprise, 90% of the works sold. It was exciting! I traveled to Amsterdam (a city I always loved), Paris and Madrid--always to the Prado. In 1987, the Flemish art dealer Emile Veranneman took an interest in exhibiting and selling my work. I moved ahead with projects of studying and painting. For me, to study is to visit museums and to compare the works of the Masters with the Moderns and the Post-Moderns.

Editor's Note:   Paul Trajman is a Belgian painter with whom Guillermo Cuello realized several "simultaneous" paintings. Paul Trajman currently resides in the South of France and exhibits with Arthus Gallery in Brussels.

Guillermo Cuello: I'm a painter and transforming material to raise it to the level of language is what I believe in. For me, drawing is like making a diagram using a-significant signs that, somehow, must come together structurally. If I refer to Rembrandt or Goya, it is simply because in them I see a carnality that engages and excites me. The illusion of inexactitude in their drawings is fed by their trying to come to terms with atmosphere instead of trying to impose precise limits on objects or bodies. 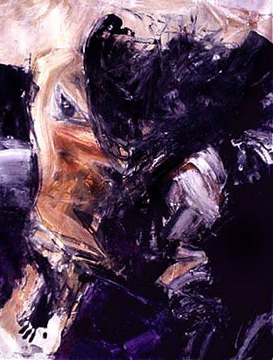 To me, this suggests that I must fracture clichés. I abandon an image when the general context or its shape reaches a state that I dare to call "embryonic form", something that goes beyond the relationships of the simple elements constituting figuration--but that stays in a state of open organization without resolving itself. Implicit, not explicit, in content. 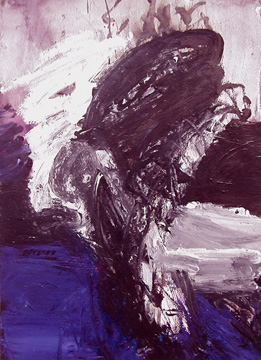 Guillermo Cuello: So, in a certain way, my paintings require the participation of the viewer. I believe strongly in the suggestive power of an image--and not so much in reaching an exact, "well made" form which is more the zone of artesanal, rather than artistic, creation.