Editor's Note: This archived article was originally posted in 2002 and the artworks referred to were included in the Whitney Biennial in that same year. 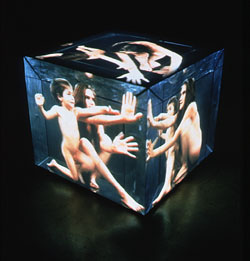 In its recent history, the Whitney Museum's biennial has drawn equal amounts scorn and praise; so, the tendency is to attend the exhibition equipped with a gimlet eye. Still, in 2000, the gifted Egyptian artist Ghada Amer was represented there with her deliciously kinky, embroidered abstract paintings. So, the biennial exhibition does have a history of occasionally ferreting-out a surprising new talent.

This year the artists who caught my own jaded eye were working in non-traditional media. The first was the video/sound artist Peter Sarkisian whose installations I had seen and admired from exhibitions at I-20 Gallery in Chelsea. Sarkisian's Whitney installation piece entitled Hover with a woman and child projected in a box, is a tightly-composed, inventive work and that retains its freshness even though it dates from 1999.

The second artist who caught my particular interest uses the computer to create visual images. Benjamin Fry, a graphic designer and computer scientist, is involved with the aesthetics + computation group from the media lab at MIT. The work in the Whitney show is part of a series entitled "valence"--a chemistry term that refers to the ability of a substance to interact with another. In Valence, Fry connects bits of data streams to points and uses the points to draw a moving visualization--mapping the transit through the data. Much of Fry's attention has been focused on using his visualizations for scientific purposes. So, it could be argued that the artifacts he creates are merely interesting natural images--beautiful and elemental like a microscopic view of a crystal or the first X-ray of the double-helix. But Fry's sense of color and form seem to take this work beyond technology and nature. Like many contemporary artists who let random elements enter their works, Fry lets the particular data flow introduce a design element out of his control. But he has selected the elegant visual vocabulary in which the data take shape. The constantly developing form that Fry sets into motion is truly entrancing.

Artworks made with non-traditional media are very different from traditionally made art in the kind of aesthetic experience they offer the viewer. Time--and who controls it--is a key element. In art created with traditional media, the viewer controls the process of perception: he/she can choose to stand in front of a painting for 7 seconds or 7 minutes, or a second a day for 7 years. Most non-traditional works require a ceding of this control. On first viewing, the work demands attention for a specific period of time. In fact, the pacing of the presentation is a key design factor in computer-based and video art. These pieces set out to control the speed and process of perception. Such manipulation can be maddening--like conducting business through a slow modem. Perhaps these artists are making a point about our place in time and culture--that the world is beyond our control. Or perhaps they just need an editor. With many video or computer pieces the material is so thin that the viewer response cannot be nuanced; the viewing experience is either amusing or boring--switch on or off.

Much computer-based art attempts to create the illusion of interactivity by offering the viewer a range of clicking options--options about as flexible as paths through a brand-name ISP. Frequently, the intellectual point of departure for computer art is the commercial Internet. Since the Net is stuck in a prosaic phase, the art built on it starts with a handicap. Some artworks inspired by the commercial Net function effectively in the conceptual sense as examples of social commentary. But as an engaging perceptual experience, they fail to deliver. Perhaps that explains why a computer art piece related to edgy science like Fry's Valence presents such a refreshing contrast: in mining richer source material it excites the artist's--and the viewer's--imagination.


Notes:
The MIT media lab has much information posted to the Net. Most of it is best viewed with a fast web connection. For those who enjoy the meeting of art and technology, noodling around this area is a real treat.

Jake Biddington works on The Street and is responsible for the opinions & information in INVESTING. Young Jake, as he is known within the virtual BIDDINGTON clan, views art, antiques and collectibles as stores of value similar to stocks or foreign currencies. He sees these items as another type of asset in which to place one's money. To that end he keeps price histories and charting information on various categories of objects. He views some items as long term investments, others as items for a quick trade--and he even sees some as short sales.

Frankly, Jake's views incite considerable controversy within the family: His mother, Claire Biddington Rosetti, the curator of CREATIVE PROCESS, sees Jake's approach as part of the damaging "commodification" of art wherein the buyers of art comprehend only its financial value and are blind to its aesthetic and social significance. Cousin Randolph, (writer of EXPERT CONSULTANCY), sees the silver lining: For him, the informed expert wins because he can use his knowledge and judgment to buy superbly interesting-- what Jake would call "off-the-run"-- pieces at relatively cheap prices, because such items don't fit the narrow criteria for quick resale.

Once the Bentley is safely garaged and he lounges sipping his second martini, Uncle Frederick Fieldhouse Biddington waxes inclusive: "Whatever gives collectors pleasure," he says. "Whatever amuses."