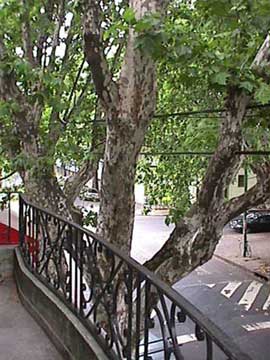 Even though the political and economic situations were rumored to have improved, I was nonetheless hesitant to make the long flight down to Buenos Aires. Was it yet another Latin American capital with gun-toting soldiers and pervasive poverty? Had consistently misguided IMF policies done for Argentina what they had done for Indonesia? In the end, it was not politics but the centigrade spread, -7C in New York City to +26C in Buenos Aires, that bought the ticket.

As Porteños, (the natives of Buenos Aires), will tell you with guarded optimism, Nestor Kirchner's regime seems to be functioning effectively. The stock exchange, housed in a grand old downtown building, trades for only a couple of hours each afternoon, but its Merval index is up more than 100% year-over-year. Versus world prices, real estate seems cheap, but there are as many "Sold" as for "For Sale" signs. Poverty is present--hardly surprising at 16% unemployment--but it is not rampant, and there appears to be hope for job growth in the improving economy. Buenos Aires is not some overgrown village awash with hoards of illiterate, displaced peasants. Boasting free university on a merit system, Buenos Aires is a beautiful & cosmopolitan city with established & new cultural institutions, thriving & stylish neighborhoods and a population of attractive & educated people, truly The Paris of South America. 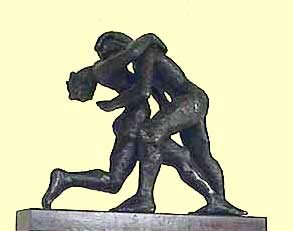 Americans like to imagine Buenos Aires as a mysterious city of darkened streets where everyone moves to the wrenching sound of the Bandoneon and the compelling rhythm of two/four time. In fact, relatively few contemporary Argentines dance their traditional dance. Having spent 50 years in obscurity, the tango is back in vogue with a certain cadre of young Porteños. This is not the dancing of aging roués & smoky nightclubs, but of hard-bodies attending floating milongas in public halls and modest confiterias. This dancesport demands significant skill and focus.

For an intro to this amazing tango sub-culture call one of the tour agencies. As an alternative to seeing a slick, theatrical "tango spectaculo", book a private lesson, dinner and guide to a milonga (this comes as a package). Learning tango in one evening is as likely as learning Spanish in one lesson, but private instruction gives some sense of the technique involved. The milonga scene provides entrée to an interesting--if obsessed--local crowd. In "after-hours" tango spots, instead of stopping at a civilized hour like 6 am, milongueros breakfast then dance all day.

In the late 19th century, British engineers came to Argentina to design the railroad system. With them they brought their fondness for Tudor style half-timbered houses and the game of golf. With at least 25 courses within an easy drive from downtown, Buenos Aires justly considers itself the epicenter of golf in South America. In fact, the Lagos de Palermo Golf Club is located adjacent to the Polo Field within in the city itself. In greater Buenos Aires, greens fees vary, but all are well below the fees for comparably challenging courses in the US or Europe. 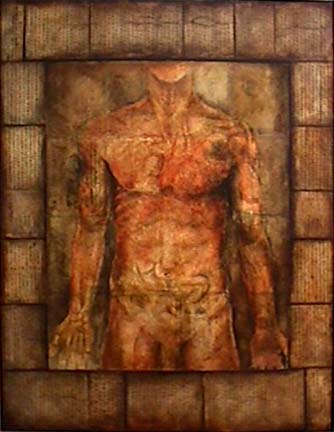 With New World wines coming into their own, deserved attention is being paid to Argentine and Chilean reds. Not only are the malbec and cabernet wines from the region of Mendoza (on the eastern slope of the Andes) full-bodied and lushly flavorful, but the little-known whites are worth drinking, too. Argentine winemakers exercise a lighter touch with new oak than do Californian or Australian vintners. Argentine chardonnays have considerable body and a style akin to a modest white Burgundy; the more floral viogniers are worth sampling as well. For sipping at an outdoor cafe, the sauvignon/semillon blends possess balance and elegance.

This being Argentina, steak is omnipresent. Argentina's range-fed beef is firmer and infinitely more flavorful than the feedlot-grown, corn syrup-fed mush we eat in the US. The Mendozan reds accompany this succulent meat wonderfully. Even in the most modest parillas, quality beef is the standard. To enjoy the full steakhouse experience at a third the price of New York City, treat yourself to a grand, expense-account restaurant such as Cabana des Lilas.

Argentine art exhibits neither the bold textured abstraction nor the ancient imagery typical of Mexican and Central American art. Instead, it is the art of a temperate clime rooted in the culture of European 19th and early 20th century emigrés--people for whom political ideas and psychological insights were of profound importance. Argentine art has a tendency to visual intricacy and reveals a profound engagement in human concerns. 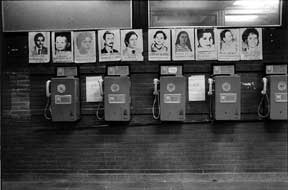 Politics are never far away in Argentina. During the 1970's, thousands of people went missing--abducted and executed--under the dictatorial regime. (Recent newspaper articles relate accounts of matching adults who were babies born of "disappeared" women back to their families through the use of DNA samples.) During the 1980's, after the fall of the military dictatorship, a visual record of that period came to light. This Silvio Zuccheri photograph documents a wall of "missing" posters. Even now, on Tuesdays around the Plaza de Mayo, you can watch the procession of the mothers of "the disappeared" who have been keeping their vigil of memory for 26 years. Other poignant reminders of the turbulent 80's appear in this exhibition: images of defeated Argentine soldiers--with no coats against the freezing cold--making their way back from the disastrous war in the Malvinas--(the Falklands to Maggie Thatcher). Also on view in February 2004 at Proa were works by well-known Argentine contemporary painter Guillermo Kuitca and his protegés. 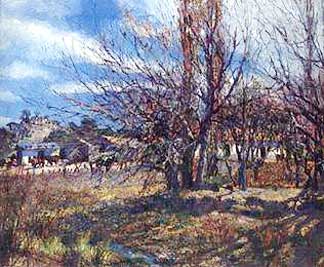 As might be expected from a state museum, the Museo Nacional de Bellas Artes presents a nice chronological overview of 19th and 20th century Argentine painting. Being introduced to a regional artist with the command of line like historical painter and portraitist Prilidiano Pueyrredón (1823-1870) or a wonderful eye for light and color like landscape painter Fernando Fader (1882-1935) is one of the joys of travel to distant museums. 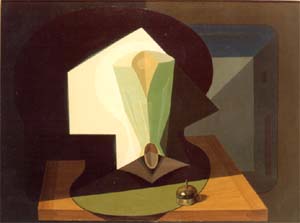 The Emilio Pettoruti (1892-1971) retrospective at the Bellas Artes begins when the young painter from La Plata wins a grant to study in Europe. The exhibition includes work from his early days (1913-1924) painting in Italy where he was absorbing influences by earlier artists such as Cezanne (1839-1906) and as well as inspired by his contemporaries the Futurist painter and sculptor Giancomo Balla (1971-1958) and the Spanish Cubist painter Juan Gris (1887-1927).

Never an innovator, Pettoruti returns home to Argentina and reworks and reflects themes and ideas he learned while in Europe. Arguably the best painting in the show, a work entitled "El Timbre" combines a Cubist still life structure with a realist image of a hotel bell. This disjunct gives a frisson of tension to the painting--a thrill notably absent from Pettoruti's other works. Generally, Pettoruti likes a centralized oval composition based on a logical and analytical--if diluted--Cubist principles. Always competent, Pettoruti's abstracts from the 1950's and 1960's represent color theory concepts in a decorative way. Pettoruti served a useful role as a disseminator of European artistic trends popularizing them in a country whose artists had been mostly absorbed in carrying on the traditions of an earlier century. 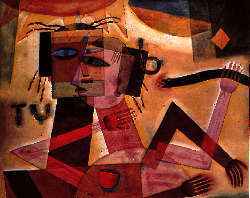 During his lifetime, Xul Solar (1887-1963) was thought of more as a thinker and inventor than as an artist. A dear friend of Jorge Luis Borges, Xul Solar's all encompassing ideas such as his multi-level chess game the panajedrez informed and influenced Borges' Labyrinths stories. The architecturally stunning Museo Xul Solar in the Barrio Norte/Palermo zone is a glorious venue for demonstrating that Xul Solar was a person possessed of a cosmic vision. His imaginative drawings and paintings made in a luminous palette are joyous examples of fantasy art.

Internet Access:
Buenos Aires is very wired. Many short-term rental apartments offer high-speed internet hook-up. Using Skype, the telephone connection via computer works beautifully from BA to the US. The "Martinez" chain of cafes is equipped with wi-fi. Otherwise, there are Internet access shops in most neighborhoods.

Retiro & Downtown area:
Tramezzini--good breakfast spot on Santa Fe near Avenida Julio
Malandrino--try the fish in this small, congenial lunch restaurant on Calle Marcelo de Alvear 868 near Suipacha. Shops selling well-priced furs, primarily fox and otter, are nearby along this street.
Cabana Las Lilas--fine steakhouse in Puerto Madero, Avenida Moreay de Justo 516
El Tocororo--for a break from the syncopated wheezing of the tango Bandoneon, try this Cuban restaurant with jazz & salsa music in the Puerto Madero.
Casa Lopez--if you have time, or patience, for only one shop, spring for top-of-the-line leather goods here on Calle Marcelo de Alvear near Florida.

Palermo Chico:
Museo Renault--in a city in love with cars, it's hardly a surprise to find a chic restaurant in an former automobile showroom. This spot is on Figueroa Alacorta next door to the MALBA.
Gropius Bar--congenial bar/cafe/gallery, Cabello 3352

Palermo Viejo:
This is a buzzing barrio of restaurants, bars and shops with zones nicknamed "Hollywood" and "Soho". Ask any local shopkeeper for one of the excellent maps for shopping and dining in the area.
Bobo--chic, boutique hotel in Palermo Soho.
Infraganti--pizza and pasta in a lively, beautiful Palermo Hollywood space, Calle Bonpland 1808
Cabernet Restaurant--fine foods & wines in Palermo Soho, Calle Borges 1757
Pastis--French bistro cuisine in Palermo Soho on Gorriti at Thames
Plazacita Serrano aka Plaza Cortazar--this square is surrounded by many cafes and restaurants for a young audience and forms the heart of the Soho section of Palermo Viejo.
Palermo Viejo New Designer Shops:
Colombas--women's designer handmade sweaters in Palermo (Soho), Calle Borges 1757
Constanza y Eloisa--women's clothing in Palermo (Soho), Armenia 1959
Trosman--women's clothing in Palermo (Soho), Armenia 1998

Las Cañitas:
This buzzing neighborhood near the Polo Field has many indoor/outdoor restaurants lining the three blocks of Callecita Baéz. Take a table, then dine, drink and enjoy the street scene well into the early morning hours. 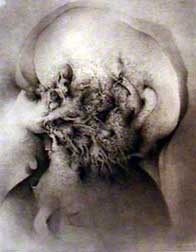