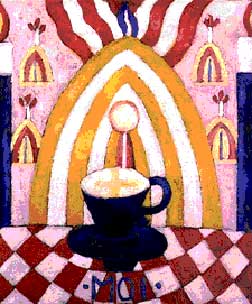 
Editor's Note: This article was published in spring 2003.

Marsden Hartley, an American painter from Maine, traveled to Europe on Alfred Stieglitz's dime and spent time in contact with the revolutionary artists and art movements of pre-WWI Europe: Matisse, Kandinsky, der Blaue Reiter and the Futurists. What branded Hartley from his exposure to this hotbed of ideas was a fresh approach to color. In his laying down of vibrant paint stripes, and also in their sexual symbolism, Hartley's works from the teens served up the visual elements that another Steiglitz painter, Georgia O'Keefe, rode into glory. 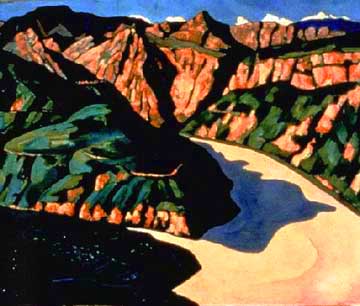 While Hartley didn't particularly enjoy the Parisian milieu, still he seems to have been seared by the high color of the Fauves. Throughout his life, Hartley retains an American straightforwardness and graphic boldness. The high-contrast painting (at left) of Vence takes the Fauve audacity with color and runs with it; so much so that this painting feels like the archetype for all high-color, hard-shadow Southwestern landscape painting. And a Matissian sense of color re-emerges in certain of Marsden Hartley's late figurative works like the peculiarly beautiful "Christ Held by Half-Naked Men" (1940-41) in which a fishbelly-white descendent Christ is supported by a flying-wedge of red chorus boys. 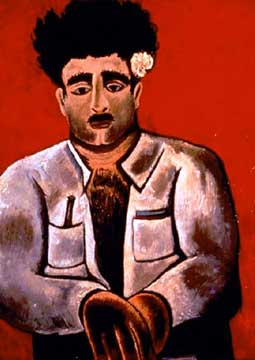 As Hartley's life and relationships change, his painting takes odd turns. Lacking an exploratory, evolutionary aspect, the effect is disconcerting rather than intriguing. Marsden Hartley apparently had no functioning internal compass; so, his work is tremendously uneven in quality. Witness the peculiar--part icon, part cartoon.--portrait paintings from the late 30's of a family of fishermen on the Maine seacoast. Only rarely during this large show of more than 100 works does Marsden Hartley hit his stride. Nowhere is it written that an artist must be consistently successful in all efforts, but an exhibition like this one makes the audience work more than most.


For this trip, we took the top down on the Bentley, secured our straw hats and headed northward from Manhattan toward New England. We chose one of the parkways. We could have taken I-95N, but it's not a Bentley kind of thoroughfare. We turned at Route 7 toward Danbury and very shortly thereafter found ourselves in the pretty Connecticut town of Wilton. Our destination was the annual Kiwanis Club-sponsored Wilton Antiques Fair.

This event is, indeed, a Bentley kind of affair. The local Kiwanis gentlemen direct one's way to parking in a grassy field and greet everyone cordially at the entry area. This yearly June event takes place under tents making it both comfortable and aesthetically pleasing. The dealers are of the professional variety--cordial, informative and asking good questions. The show was weighted toward Americana with many interesting pieces of furniture and a fine array of quilts. But there were also interesting dealers in Southwestern jewelry, sculpture and continental furniture. The food tent offered ample supplies of lemonade and regional specialties from cold lobster to Italian sausage and peppers.

"A city whose fame as an insurance center has extended to all lands and given us the name of being a quadruple band of brothers working sweetly hand in hand -- the Colt's Arms Company making the destruction of our race easy and convenient, our life insurance citizens paying for the victims when they pass away, Mr. Batterson perpetuating their memory with his stately monuments, and our fire insurance companies taking care of their hereafter."
--Hartford, Connecticut native son Mark Twain in a speech of 10/12/1874
Back in the Bentley, our next destination was Hartford. Hartford is the state capitol and, for more than 100 years, the center of America's insurance industry. The purpose of this specific Bentley outing was a pilgrimage to view a show at the Wadsworth Atheneum. Downtown Hartford is an attractive rebuilt, racially mixed community but with few downtown hotels. Note: The Hastings Hotel & Conference Center on Sigourney Street (off Asylum Street) just across from a large Aetna building is very quiet on the weekend--but the rates are also more subdued than during the week. Also recommended is the Goodwin Hotel (on Asylum), a refurbished hotel in an historical facade

Having noted an attractive theater on the way into the city, we called for ticket information. We were informed that one hour before show time remaining seats would be offered at 50% of face value. The theater, called the Bushnell, is a large, lovingly restored edifice soon to become vastly enlarged with a modern addition. The Bushnell shows major Broadway road productions with star casts & complete orchestra. Tickets were, in fact, readily obtained. (For more information about special offerings of arts you might also check: The Greater Hartford Arts Council.)

Before theater, an early dinner at Savannah--391 Main (860 278-2020) three blocks and easy parking from the Bushnell--provides a very sophisticated culinary treat. Reservations are helpful since the restaurant is thronged on theater nights.

The Wadsworth Atheneum--America's oldest art museum is a true museum lover's delight. Spacious and uncrowded, the permanent collection alone--from Renaissance (Cranach's "Feast of Herod") & Baroque (Tiepolo--the son's--Building of the Trojan Horse) paintings to great American Hudson River School (Thomas Cole's "Mt. Etna") and American Impressionists (Julius Spencer's "Boating Party")--is worth several visits. Since sustenance is always an issue, the museum's convenient courtyard restaurant with it's pleasant Sunday brunch is a welcome amenity, but be forewarned that a reservation is advisable.

Hartford Steam Boiler Inspection and Insurance Co. formerly held a venerable corporate art collection. The collection includes more than 100 works of early 18th through early 20th century paintings and furniture including paintings from Connecticut artists Henry Ward Ranger, Edward Rook and Childe Hassam (from the Lyme artists colony) as well as works by John Twachtman, Theodore Robinson and J. Alden Weir from the Cos Cob colony. Update: As of 2003, the collection can be viewed at Florence Griswald Museum in Old Lyme, CT.

Once more embarking in the Bentley, a short drive westward toward the upscale Hartford suburb of Farmington takes us to the Hill-Stead Museum (860 677-4787). This museum is housed in a McKim, Mead & White/Theodate Pope structure built by industrialist Alfred Atmore Pope and features a Beatrix Farrand-designed sunken garden. The museum owns fine furniture and important Impressionist works by Degas, Manet & Monet.

For a gentle entry back to Manhattan, the Bentley followed a route through Litchfield and Danbury, with the briefest of stays on 684 until the Sawmill Parkway offered a pleasant alternative. A return down the Henry Hudson Parkway along the beautiful Hudson to the west side of Manhattan is perhaps the single most charming way to enter The City by automobile.