With the US assuming the role of international thug and France vehemently opposing our war-mongering, I was anticipating a touch of the cold shoulder on this visit. Not so. Parisians continue to appreciate New Yorkers and reminisce with pleasure about their own visits to The States. The economic pace in France is visibly less hectic than in 2000. Young professional Parisians are disillusioned with the work-only ethic, and a backlash against the erosion of quality-of-life is building. A television car commercial shows a young French guy having to endure dinner with an aggressive, biz-only American who doesn't even bother to look at the menu; the Frenchman consoles himself by visualizing his hot car parked out front. But it's clear that once the American leaves town, eating well will resume the appropriately higher priority. Enroute to check email at an Internet cafe around 7 am, I walked empty streets; Parisians hustle to work at 9 or 10 o'clock. Pas mal.

Prowling the art galleries seeking the new and the magical turned up solid work but little to make the pulse pound. With arched eyebrows, I was instructed that the inspiration flow across the Atlantic remains very much west to east--US to Europe. But, like me, Parisians won't be surprised if Latin America and China ascend as important sources.

At major museum venues, the fall season is as rich as a gratin dauphinoise in contemporary art, 20th century and Old Masters. 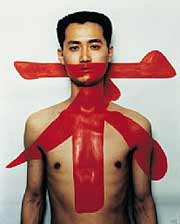 From the Ullens collection, this encyclopedic exhibition covers Chinese art from 1993 to the present. A veritable Noah's ark of contemporary Chinese art, it includes a range of media and styles of expression that combine to make an informative picture of Chinese culture and politics in the decade just ending. Important on many levels, this show reflects various aspects of changes in China itself. It is a study of what artists in insular cultures select as expressive means when wishing to communicate to the worldwide audience. (Many chose the human form because it has no important place in Chinese art history.) Also, it demonstrates how prescient collectors can be wise enough to choose everything above any one thing. Surely this extraordinary exposition will travel to other venues. If not, a fine--if expensive--catalogue is available at the online site. October 5-28, 2002.(Metro: Concorde.) 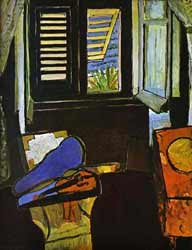 Matisse Picasso at the Grand Palais

Having read reports of Picasso's profound sorrow when Matisse died, still I hadn't appreciated the extent of their creative attachment and interplay. This huge exposition shows dozens of examples where the two giants--very differently--painted exactly the same painting. This "call and response" reaches symphonic proportions. Braving the throngs is worth the effort to view this beautifully composed exhibition which includes several significant paintings from hard-to-access collections such as Russia's Hermitage, small European museums and private collections. September 24, 2002- May 20, 2003. (Metro: Champs Élysées-Clemenceau.)

Matisse painting "Interior with Violin"
on view at the Grand Palais
from Statens Museum for Kunst, Copenhagen, Denmark 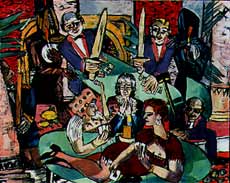 Max Beckmann A Painter in History at Centre Pompidou

Enjoy the fine view of Paris from atop the Pompidou as the sun sets, then gird the loins before experiencing the Max Beckmann show. Beckmann's graphics and paintings are intriguing in composition, but devastating in content. Beckmann comes to accept human brutality so completely that even his up-beat paintings speak of corruption, desolation and despair. A tough show. September 12, 2002-January 6, 2003.(Metro: Hotel de Ville.) 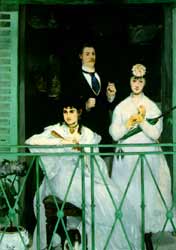 Vélasquez to Manet at the Musée d'Orsay

Once someone points out that Manet was influenced by Vélasquez and 17th century Spanish realism, it's obvious. But, before seeing this show, it simply hadn't occurred to me. Like Matisse/Picasso, this well-designed exhibition makes its points visually. Forget the acoustiguide and rely on your eyes. September 17, 2002 to September 19, 2003. (Metro: Solferino.)

Restaurants and Bars:
Café Marly--The Costes brothers' restaurants are most chic. This one overlooks Pei's pyramid at the Louvre; another rests atop the Centre Pompidou.
Chez Prune--A spot for brunch or casual drinks/dinner in the newly trendy art gallery and au courant shops neighborhood near Canal St. Martin. Quai Valmy at Rue de Beaurepaire. (Metro: Republique.)
Cartet--For the restaurant-weary traveler, this is the place for classic French cooking with the ambiance of mamam's small kitchen. Rue de Malte. Call to reserve.
Les Fumeurs--Branché (cool) bar of choice. Rue Rivoli across from Louvre.
Café at Mus&eacutee d'Orsay--For curing museum feet, make a stop at this cafe located in an elegant space on the top floor of the museum behind the huge clock.
Jazz Clubs:
Ducs des Lombards--Pleasant, intimate club on Rue des Lombards.
Lionel Hampton Jazz Club--At the Meridien &Eacutetoile, more expensive and less intimate than other Parisian clubs but pleasant and featuring fine talent.
For new talent, word has it that Café Universel is the spot. Net source for current Parisian jazz calendar: www.jazzvalley.com which also posts photos of performances at the site.

ABOUT THIS FEATURE
Jake Biddington takes over for Frederick Fieldhouse Biddington for this art touring article.