Editor's note: Given the drop in museum attendance and rise in art insurance rates post-September 11th, show dates may change with certain shows extended or rescheduled. Travelers are urged to verify exhibition dates before planning a visit. 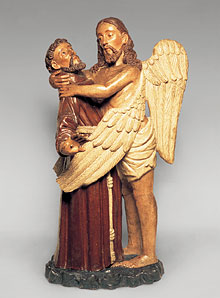 The museum at the National Academy of Design, one block north of the Gugggenheim at 90th Street and Fifth Avenue, usually exhibits realist and representational art. From February 6-April 7, 2002, a show of American modernism and abstraction is on loan there from the Smithsonian Art Museum. (While undergoing extensive renovation, the Smithsonian has organized eight shows that are currently touring the US.) This show includes works by artists as early in the 20th century as Arthur Dove (1880-1946) and as late as Jennifer Bartlett (b.1941) and Eric Fischl (b.1948). Some of the works are atypical of the style that made these artists famous. With the benefit of rearview vision, it's interesting to watch artists trying on a variety of representational hats. Several of the early abstracts in the show were painted by American artists with little foreign contact. The straightforwardness of these paintings contrasts strikingly with the sophistication brought by World War II era European artistic invasion.

Polychrome Wood Sculpture at the Guggenheim

At the Guggenheim, "Brazil: Body and Soul" presents an ambitious display including paintings by early visiting Europeans, indigenous art, religious art, and contemporary works. The polychromed, wood Baroque sculpture steals the show. This exhibtion is scheduled to run into May 2002.

Also on view at the Guggenheim "Norman Rockwell: Pictures for the American People" is scheduled to run until March 2002. The Rockwell show demonstrates the difference between illustration and painting: Norman Rockwell made his works with the goal of their being visually effective at less than 1/4 of the size he painted them. So, the full-size works sometimes look disturbingly raw and, in many cases, formulaic--but they do communicate quickly and clearly. (Photoshop users will see a parallel: when reducing an image, contrast and saturation must be enhanced to make it "pop" effectively.) On the emotional topic of de-segregation, Rockwell summons his full range of talents, and he proves himself an able painter. "The Problem We All Live With" (the solitary girl-child in a crisp, white dress escorted by headless men-in-suits) is a moving narrative painting. To accompany the show, the museum offers a "family activity guide" with questions and comments useful for introducing younger visitors to the historical context of Rockwell's work. With a $15 admission price, a few extras are welcome.

For those who missed the blockbuster Surrealism exhibition at the Guggenheim a few years ago, the Metropolitan Museum is offering a concise catch-up show organized by the Tate. Scheduled to run until May 12, 2002 "Surrealism: Desire Unbound" includes the usual suspects--Di Chirico, Magritte, Man Ray, Ernst & Dali--but also less familiar painters such as Max Ernst's wives Dorothea Tanning and Leonora Carrington as well as Joseph Cornell represented by a nice batch of box constructions. 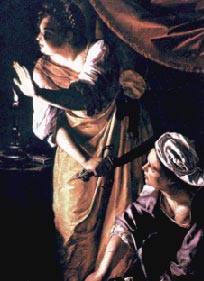 The Met show most likely to hit art-crowd hot buttons is the just-opening "Orazio and Artemisia Gentileschi: Father and Daughter in Baroque Italy". Despite a rocky start, Artemesia, whose art teacher was tried for her rape and whose career was ignored by four centuries of art historians, is coming back in a BIG way. First with a film about her life; now with a museum show. Since female artists earning a significant living in the16th century were rare, attention to her work is overdue. The show runs until May 12, 2002. Admission: pay what you wish.

Editor's Note: For solid background on female artists in European art, Harris & Nocklin's groundbreaking text Woman Artists 1550-1950 is a must read. For an eye-opener on the place of women in Renaissance Italy, refer to the popular novel "Galileo's Daughter".

Lunch or dinner on the upper eastside: Brasserie Julien (Third Avenue between 80th and 81st) serves paté made from the family recipe and good French wines by the glass.

Half of the MOMA (53rd between Fifth and Sixth Avenues ) remains open while renovations continue. In mid-February, studios from SoHo to Dumbo emptied as painters thronged to the first evening of the Gerhard Richter exhibition. 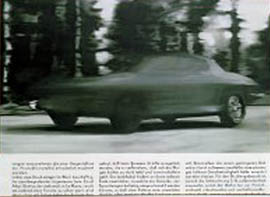 This show is testimony to the value of perfectionism and perseverance. While his photo-influenced grisailles are eyedazzlers from the outset, Richter's struggle to command high-color abstraction took years--high-profile years in the spotlight. Eventually, Richter succeeds, and the impulse to cheer is nearly irresistable. Richter has choosen not to take the safe route of endlessly quoting himself; his commercial as well as aesthetic success offers a blast of fresh air to a stifled art world. Gerhard Richter: 40 Years of Painting continues through May 21, 2002.

If representational art is to your liking, check out mid-town galleries such as DC Moore--where the Feburary 2002 Janet Fish show is a stand-out--(724 Fifth Avenue between 56th and 57th) and Forum (745 Fifth Avenue between 57th & 58th). For modern masters and some contemporary art, try the 25 galleries in the Fuller Building at 41 East 57th.

If you don't want to wait in the lines going up to the top of the Empire State, choose the Morgan Library at Madison and 36th Street as a re-grouping location. It houses superb drawings, paintings and a Guttenberg Bible. If the diehard tourists in your party are late, you can relax in the pleasantly upscale atrium cafe.(Subway Stop: 34th Street)

West of the tourism mainstream, the neighborhood called Chelsea runs from 14th Street through the 20's west of 6th Avenue.

On Saturdays & Sundays at the crack of dawn visit the Outdoor Antiques and Collectibles Flea Markets. The biggest is at 6th Avenue and 26th, but you'll find others within a block or two. Also, check out the multi-dealer antiques buildings on 26th Street one block east and one block west of 6th Avenue. Much of the contemporary art gallery scene formerly in SoHo has taken up residence far west in Chelsea's loft buildings in the low twenties between 8th Avenue and the Hudson River. Gracie Mansion Gallery at 504 West 22nd exhibits witty, engaging pieces often with Pop inspiration. 515 West 20th & 529 West 20th are both big buildings with many galleries showing a wide range of representational styles from abstraction at Andre Zarre to installation at I-20. Check schedules before going since gallery hours vary.

Continue west one-half block toward the Hudson River and you'll see the Chelsea Piers complex. A sports facility with golf, bowling, riding, etc. The large murals are the work of Pop artist John Clem Clarke whose paintings and prints are offered for sale in BIDDINGTON's Contemporary Art Gallery.

Lunch or dinner in Chelsea: Red Cat Grill (10th Avenue between 23rd and 24th) is the right place to see and be seen; the Pakistani spot next to the service station (10th between 22nd and 23rd) has a following among cabbies and the more intrepid members of the art crowd.

For a child-friendly art venue, The Museum for African Art (593 Broadway between Prince and Houston) is hard to top. Along with exhibiting fascinating objects, it provides ambient music, video clips and other multi-media to help the visitor fit these objects into their cultural setting. The museum offers an array of lectures and events related to exhibitions and a shop that sells real art works and crafts from Africa. The current exhibition: "Bamana: The Art of Existence in Mali" shows structures and landscapes so other-worldly that they might be sets for a "Star Wars" sequel; the show runs through May 19, 2002. Admission: $5 with many qualifying for half-price. Sundays free.

Soho restaurants remain varied and interesting. But, as the neighborhood has matured, the shopping has gone big-name European mainstream with the cool and innovative design crowd--and some art galleries--drifting further east into Little Italy and the Lower East Side.

SoHo gained fame thanks to the artists who transformed the cast-iron factory buildings into painting+living lofts during the 60's and 70's and galleries opened there are well. While many galleries have decamped to Chelsea, some good ones remain. Several buildings along Broadway house galleries on every floor: 591 Broadway is home to June Kelly Gallery who shows quality contemporary sculptors and painters. The Drawing Center (35 Wooster Street) is a non-profit space known for its interesting works-on-paper exhibitions.

Around the corner on West Broadway between Broome and Grand, The Cupping Room offers a congenial, old SoHo spot for a midday caffeine-with-muffin break before continuing along the culture vulture circuit.

A favorite arts stop in lower Manhattan is the Museum of the American Indian (a branch of the Smithsonian) in the beautiful old Customs House building at the southernmost end of Broadway. The permanent exhibition has a lot of "touch and tell" devices, good visuals and good sound effects. The museum is engaging for both adults and children. There are gift shops on premises that sell fine contemporary Native American crafts such as jewelry, pottery, weavings and carvings; the shops also stock a selection of related books.

For dinner in Tribeca: Capsouto Fr&egraveres (Washington at Watts Street) blends together French cooking with a relaxed, welcoming style in a handsome, open space.

A short ride on the "F" train from SoHo under the Lower East Side and the East River to the York Street stop in Brooklyn is like time travel to the SoHo of the 1970's. This area called "Dumbo" (down under the Manhattan Bridge on-ramp) is home to artists, a theater space, alternative galleries and restaurants. Open Thursday through Monday, d.u.m.b.o arts center (doc) is a non-profit art space that hosts contemporary shows by guest curators featuring works by artists from the surrounding neighborhoods. Nearby St. Ann's Warehouse, a performing arts space, hosts innovative theatrical and musical productions for short runs. St.Ann's has a very civilized lobby cafe run by Rice whose restuarant 2 blocks away on Washington Street features tasty Asian-Latino fusion cooking and moderately-priced wines. At 111 Front Street, Dumbo General Store hangs works by local artists and makes a comfortable stop for a latté and panini. Choc-aholics will lose all semblance of control at Jacques Torres at 66 Water Street whose retail café includes a window into the chocolate factory next door. Enjoy the ephemeral pleasures of Dumbo soon. Its lost-cost, low-key delights are bound to be supplanted shortly by the prices and attitude that comes with gentrification.

Do not drive a car into Manhattan. If you have done so garage it immediately. While garages are very expensive, they are less expensive than having your car towed away. There are almost no legal parking spaces on the street in the City.

Ask directions to the nearest subway stop and purchase a 7-day Unlimited Ride MetroCard for $17. This card allows you to ride subways& buses and transfer between the two at will--all for $17. It is tremendously convenient. Each person in your party carries his own card; (there is an 18 minute reuse restriction in the same station or on the same bus.) The MetroCard will allow you to feel free and be impulsive. (And save you the annoyance of hunting for exact change or hailing a taxi.)
More Art & Antiques Destinations:

In this section, Frederick Fieldhouse Biddington offers suggestions and descriptions of interesting art & antique hunting destinations. Some of these places are always in business; others revolve around special or seasonal events. These are excursions we at BIDDINGTON'S--upmarket, online art & antiques auctions and Contemporary Art Gallery--have enjoyed making. We hope you'll like them, too.